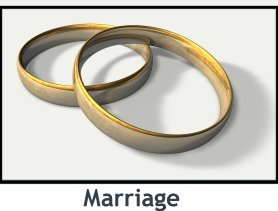 The Case for Marriage
Why Married People Are Happier, Healthier, and Better off Financially

This is an excellent source of information for the married couple on the benefits of marriage, and why it is not the same as “living together.” they provide a wealth of statistics, sound reasoning to explain them, and detailed readings into 100s of published studies to make sense of the impact of marriage. However, while the authors avoid taking a stand in this book on the impact of marriage for gay and lesbian couples, and only acknowledge that it is a point for controversy, Maggie Gallagher has been quite outspoken against it. Prejudice aside, the work is still quite good and a basic reference in this area. They argue that the promise of permanency is what makes marriage more of a beneficial relationship than simply living together. This allows each to direct their resources to different areas, to specialize in some areas while the other specializes in other areas. Instead of having to be proficient in all areas, they can divide up their responsibilities and accomplish more by working together.

What’s So Great About Marriage?

While there were eight times as many cohabitating couples in the 1990 census as in the 1980 census, marriage and living together are not the same. Cohabitating couples do not have the same kind of commitment. Waite and Gallagher note that cohabitating couples are less likely to be sexually faithful. Faithful partners do not worry about sexually translated diseases, are more likely to work to improve their sexual relationship, and do not have to worry about sexual jealousy. Cohabitating couples are also less likely to manage their money as well. In a couple who live together, one can spend extravagantly, while the other says little about it so long as the bills are paid. On the other hand, in a married couple, if one spends extravagantly, the other may have plenty to say about it.

Cohabitating couples are also less likely to monitor each others’ health, remind one to go to the dentist, prepare healthy meals, and speak up about unhealthy behaviors like smoking, drinking, and reckless driving. They also do not specialize in different areas, since they know the relationship could end without strings. Further, women who were more career oriented were more likely to cohabitate (57%), as were men who rated their leisure time as more important (53%) (Clarkberg, 1995). However, cohabitators tend to hold more positive ideas about divorce, and more negative attitudes about marriage in general as well. Cohabitating women do not show the same level of high risk behaviors that single men do, but they are more likely to be accompanying such single men (Umberson, 1987). Married women are more likely to have private health insurance (about 80%) than single women (about 50%) (Hahn, 1993).

As for abuse, children in single parent homes or step-families are at a high risk for physical and sexual abuse. Step-fathers and boyfriends of the mother are the highest risk abusers. Although they typically contribute on 2% of the childcare, they are responsible for almost half the reported abuse incidents by non-parents (Margolin, 1992). One study concluded that “Living with a step-parent has turned out to be the most powerful predictor of severe child abuse yet” (Daley and Wilson, 1996).

Further, while part of making the cohabitating relationship “like marriage” rests with the couple, part of what makes marriage “like marriage” is the system and society outside the couple. For example, gender roles accepted by the larger society shape how we respond to marriage. If a wife complains her husband is not taking care of the yard, or maintaining employment, socially sanctioned sex roles reinforce her arguments that this is his job. Sex is another area where the vow to remain faithful impacts the relationship. When divorce is granted (whether in a religious institution or court of law), infidelity is often seen as a “contract violation” and so something we as a society evaluate.

Another factor is the access to knowledge about each other that spouses have. You could form a legal agreement to provide access to your bank account, health benefits, retirement savings… but you would have to watch carefully to see that the other person did not steal from you or squander this money. Spouses can monitor the others’ habits closely, and have some legal power to do so.

Waite and Gallagher trace this back to the 1960’s and Bernard’s work. Some of this is based on studies of mental health that used depression, anxiety, and passivity as the primary indicators of poor health, problems women were more likely to report than men. They did not study substance abuse, violence, and risk taking behaviors for example, which men would be more likely to endorse. They add that perhaps the failure of a large benefit for women was because they didn’t have as severe problems as men so the small effect for women only looks small because the effect for men was so big. When the studies reviewed by Bernard showed women reported greater happiness when married, she dismissed this as the result of social pressures that made women admit to feeling happy when they didn’t.

Further, these studies didn’t control for having children, and the differences in economic success men and women could hope for. Thus, married men could earn more than unmarried men, but little difference could be shown for poorly paid women, married or not. More modern studies show beneficial effects of marriage on both men and women, and women today have more access to education, options for higher income jobs with status, and social norms for equality. There are still inequalities, but they are not as pronounced today.

They note that 86% of the married people who rated their marriages as unhappy who stayed together rated the marriage as having improved five years later.

But what if they stay unhappy? They note there is a difference between being unhappy in your marriage, which probably isn’t harmful to the children, and having a conflicted, bitter, quarrelsome, hostile marriage. The studies that link negative child outcomes to divorce that have found negative results when children stay in conflicted homes has tied child health and well-being to these specific kinds of indicators.

So how many marriages are the high conflict type, the type that need to be ended for the welfare of the children? Amato and Booth concluded about one third (1997).

Being divorced doesn’t help much. Divorced moms report more stress as single parents than they do as married parents, and often list “ongoing conflicts with ex-spouse” as one of the biggest stressors. They feel as a group they are less effective as parents, and have more trouble making their children mind them (Webster-Stratton, 1989).

Amato and Booth (1997) also point out that second marriages often aren’t any better than first marriages.

Waite and Gallagher believe the answer is no. Cohabitators are expecting the same rights as the married, poor families are penalized for marriage, and liberal attitudes toward single parenthood, divorce, and cohabitation are at fault partially. Also to blame are professionals who make divorce more acceptable and staying together to work out problems seem less important. Family lawyers aren’t much help either, and no-fault divorced may be an “easy out” for one person to make a unilateral decision to end the marriage. They add that fears of divorce also destabilize the marriage, by weakening the commitment and investment of each person.

They offer several suggestions for improving the marriage stability rate. They state:

“Family experts, in other words, have an obligation to let the public know: Sure smoking kills, but so does divorce. Yes, a college education boosts a man’s earnings, but so does getting and keeping a wife. Of course children need parental attention, but they do best if they get it from both a father and a mother.”

Additionally, they say we should continue to do studies and collect research, alter tax benefits that work against lower income families, and make divorce a little more difficult (e.g., a “waiting period” before you can finalize the divorce). Further, better protection of spouses who put the children before their career development, and reinstatement of fault grounds for divorce and considering them in custody and alimony. Enlisting the support of clergy and mental health professionals, and supporting the roles of fathers and men as well could help slow the divorce rate.

The Case for Marriage: Why Married People Are Happier, Healthier, and Better off Financially
by Linda J. Waite and Maggie Gallagher