What is Vedantic Thought?

Vedantic thought is based on the vedas – the Upanishads, the Bhagavad Gita, and Brahma Sutras. These are the holy books of the Hindu or Yogi belief system. This philosophy has been developed for centuries, from Adi Shankara (800s), to Vivekananda (who came to Chicago in 1893), to Ramana Maharishi, to the Maharishi Mahesh Yogi (who the Beatles sing about).

Two core concepts are the Self and Consciousness. 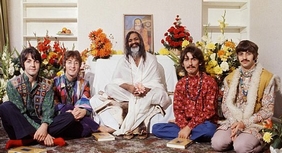 However, there is another part of the self, roughly what we think of as spirit, we don’t see – this is the thing Hindu/Yogi philosophy, as well as Buddhism (as a religion of a philosophy) and spirituality, add that we don’t cover in psychology (despite the meaning of the root psyche). More on this below…

Thus, in Hindu/Yogi thought, treating a “problem” means addressing something wrong in the biological, psychological/sociological, and spiritual realms. To address a problem, you address

Vedantic thought sees humans as having cognitive experiences, emotional experiences, and volition and action in the world. This is very consistent with how psychology sees people too.

This refers to how we construct an understanding of the world. One thing we rely on is instinct, the “eat or be eaten” way of thinking hard-wired into our brains. This part focuses on the present life, and happiness or fear/anxiety is based on what we see in front of us.

Therapy often involves work specifically with this part of human experience, especially in work with trauma victims. Victims of abuse and traumatic events (from children to soldiers) suffer because they struggle with a constant threat-assessment system, if you will, that interrupts daily life and functioning.

Another part of the cognitive experience is the rational mind. Our mind tries to make logical sense of the world (at least the world we get to see) around us. This is a good idea in many ways, but seriously flawed in other ways because the world is not entirely logical and rational. As a result, our understanding is full of errors. Nonetheless, we create a story with a working model to explain the past. We rely on imagination and perception to understand the world. Then we make some discernment (viveka) and form a model of the world, people, and how things work… that guides us. Using that working model of the world to predict the future can lead us to be fearful of negative things to come, anxious we will lose positive things we have, and focused on avoiding both of these. 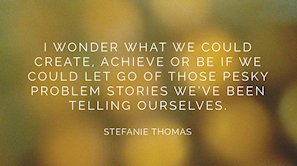 A third part of the cognitive experience is the discriminating mind. Along the way in life, we check the accuracy of our model of the world from moment to moment. We get wrapped up in what we think we must be and do in order to get the future outcome we want. We let these moment-to-moment assessments… called vritti, or little thoughts in the moment… direct what we do.

The mind is thus full of desire and avoidance, doubt and confidence, faith and lack of faith, steadfastness and lack of steadfastness. Think about how we talk about one part of us wants one thing, but another wants something different or even directly opposed… think about how we talk about conscious and unconscious things we know and desire… and how we discuss a “true” self and a “false”, which can lead to forgetting the true self and overidentifying with the false self….

Therapy often deals with these splits in our sense of who we are and how they limit our models of our life (as with narrative and with solution-focused therapy) or our experience of ourselves in the world (as with humanistic therapy).

This is consistent with the Buddhist analogy of the mind as like riding a horse.

This refers to our overall emotional experience of the world (like the psychodynamic concept of affect tone) rather than single emotions. Cognitive experiences can drive us to focus on emotions as ends:

Therapy involves working with people who feel they don’t know themselves – why they do, feel, think… the things they do, and so feel miserable. In therapy, we try to help people see the forces that pressure us to be what others want, and how we hide from others to avoid being what they don’t want. As a result, therapists teach couples and families to find ways to be genuine allow each other to be genuine, and to accept each other with each person’s unique strengths and weaknesses.

At some point, most therapists will discuss that the client is not simply what others believe them to be. They are the Self, and feel anger, pain, and fear, but also strength, forgiveness, fortitude, courage, and will. Partners and friends are insensitive sometimes, unlovable sometimes, selfish sometimes… but also sensitive, loving, and caring at other times.

Of course… in cases where the partner is violent, abusive, etc… we focus on the client’s safety first; however, over time, seeing a cruel or abusive person as seriously flawed is core to seeing the self as someone who never deserved the abuse or cruelty. Forgiving the other and the self can be intimately tied together, even if repair of the relationship is not possible.

Contentment comes from discernment or seeing both our likes and dislikes as simply part of the way of the world. Neither one is better than the other, so neither one is really worth putting too much energy into.

This refers to our free choice in all we do in this world, which shapes us, and is part of what we take with us into the next life (this is what karma is about).

This is part of the Hindu/Yogi ethical system – the five yamas or what we do and don’t do, and five niyamas or values/virtues to guide our living (by Patañjali in the Yoga sutras) 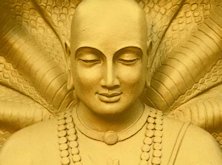 The soul we think of, or the Self with a capital S, is the ahtman… which is really Brahman, the Divine or supreme soul. The Self that is our nature is the same thing as the Divine, not a separate part or a thing that is like the Divine but still different. Our problem is that we have forgotten what our Self is, and have over-identified with the self (with a little s, the self we come to think of in our bodies moving through daily life).

This is a very different idea than we tend to hold in the West. This may seem to be a bit too much detail, but consider the difference and similarities between Hindu/Yogi beliefs and Western Christian beliefs. This is a difference in philosophy and theology, but also in a fundamental understanding of humans:

Thus, when you think about it, this highlights a profound difference in worldview and understanding of the human condition.

In closing, as with Buddhism, I would offer that learning about the basic ideas, goals, and perspectives of Vedantic and Yogi offers us a way to understand and help people from other cultures who might be very different from us. However, more than that, it gives us a better way to simply understand the human condition, and with that understanding help people.