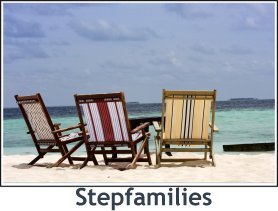 Bray and Kelly report the findings of their extensive research in a new book, Step-Families: Love, Marriage, and Parenting in the First Decade. They explain that they found three main types of step-families. They discovered that step-families have their own Life Cycle, different from “traditional families,” and it takes several years for the family as a whole to solidify. The first two years are marked by intense conflict. The next two to three years are marked by relative peace. After that, turmoil comes again as the children reach adolescence, but then matters settle and the family, having worked to build itself into a real unit, is able to weather the adolescent years without too much trouble.

As step-families come together and begin to bond, they resolve into one of three types: the Neo-Traditional, the Romantic, or the Matriarchal family.

The birth of the “our” child, or the matriarchal mother and her companion’s child, usually brings a host of problems. The parents have to renegotiate their roles. Mom’s career advancement may also cause problems; as she becomes more overwhelmed, she needs more help. Whether or not it is more than the husband wants to provide may determine the future of the marriage.

Cycle 1
This covers the first two years, and entails joining as a step-family, dealing with:

This time marks a high risk period, and 25% of step-families dissolve during this time. However, 75% of families re-examine their beliefs and ideas about family, and grow to find a new balance in their homes. This happens by carefully walking around and by accidentally stumbling right over issues such as insider-outsider differences, side-taking set-ups, and the problems that families work hard to deny. Honest and clear communication is a key to surviving this phase. Communication over successes, failures, hurt feelings, disillusionment, and more, is crucial to surviving the first two years.

Several keys that Bray and Kelly offer are:

Some of the more prevalent fantasies step-families can fall vulnerable to are:

Sometimes children still harbor powerful reunification fantasies, sometimes including the step-father or step-mother. While logically these make no sense, they are still powerful possibilities in the mind of the child.

Cycle 2
This covers years two through five, and is a time of relative peace and happiness. It also coincides with a relatively calm period of childhood, ages 6 to 10. It is common to see that step-parents and children have built a comfortable relationship and developed rituals together.

During this time, ideas about “what a family should be like” may be met easily. It can be a great time for step-parents and step-children to solidify their relationship with common interests or outings together, and for the family to build the “step-family video library.”

Cycle 3
Good Times
This covers years five through nine. It is marked by greater marital satisfaction and stability. However, it is also marked by intense stress and some bickering; adolescence and the resulting turmoil it brings put an end to the peaceful period in Cycle 2. However, most step-parents found this period was less unhappy and distressing than you might expect.

One reason for this is that this period of stress stems from the teen’s experiences of developmentally normal changes. Other families get through this, and step-families can too. They have had several years to work out problems, develop stronger ties, and experience considerable success in handling family problems.

Another reason these families weather this period well is because they have stopped thinking of themselves as a “step-family” and simply as a “family.” It is not so easy to divide the parents, expose wounds from the past, or allow communication problems to cause discord. The children have turned out well in the vast majority of cases, overcoming the stress of the divorce, improving in school, and making and keeping good friendships. They feel a significant sense of pride in their accomplishment.

And the Bad
Some step-families do run into problems in this stage though:

Bray notes that when they asked teenage step-children what they called their step-fathers, some interesting results were found:

This did not change from childhood to adolescence. Most step-fathers realized “Dad” was likely to be reserved for the biological parent and the special bond that existed there. They were OK with a first name, but hated being referred to as “my mother’s husband.” Bray and Kelly report that about 20% of adolescents want to move out during this phase and live with the other biological parent. In some ways, this is an easy way to establish independence from the step-family, and allow for greater closeness in the relationship with the other biological parent. As long as the step-family adopts an “open-door policy” that allows the teen to move back if they want, all can go well. However, often teens move away because of dissatisfaction with the step-family processes, and arguments with the step-parent. Moving may allow them to run from their problems, but parents may feel like they have no other choice but to let the teen move and hope for the best.

Bray and Kelly found several good coping skills for dealing with the ex-spouse:

Step-Families: Love, Marriage, and Parenting in the First Decade by Bray and Kelly