Why Do People Divorce?

Why Do People Divorce? 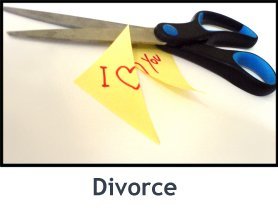 Estimates from the US Census tell us that almost half of all marriages today end in divorce, and the average marriage lasts almost seven years. This averages to almost one million divorces per year for the last ten years. If you factor in the ending of gay and lesbian relationships (since such couples can’t be legally married, they can’t be legally divorced and thus don’t get counted in these statistics), as well as committed but unmarried heterosexual couples, the numbers grow even more.

There’s been a lot of research done on why couples end their relationships. There are many myths, but, reviewing some of the common reasons given in popular circles…

While in my experience couples present many different reasons for considering a divorce, they almost always reflect one of the above situations. Regardless of the specific problem that brings a couple to consider this, many of the same kinds of problems can develop. Below is some of the data on marital stress and difficulties.

Cummings and Davies, in their book, Children and Marital Conflict: the Impact of Family Dispute and Resolution, point out that in 30% of couples experiencing relationship distress, one parent is suffering from significant clinical depression. Since women experience significant levels of depression twice as often as men, it is more likely that the depressed partner is a woman. However, men may also become depressed, and turn to alcohol or overworking to cope and in some ways escape the marriage.

When one partner is depressed, the children are also at greater risk for depression too. The parent’s unavailability is disruptive to their lives and their sense of the home, and they may become withdrawn and quiet, or become more anxious and hyperactive. Typically, in a two-parent home, the other parent tries to compensate and faces many new stresses that take their toll:

Research has shown that these stresses often lead to significant depression in the functioning partner, although in the majority of cases it does not lead to clinical levels of depression. In clinical work, I often find that the functioning spouse is the one who initiates treatment, often because they “can’t take it anymore.” Marital work may continue, or lead to individual therapy for the depressed spouse.

Substance abuse tends to disrupt a relationship. Many studies have shown that substance use is not a risk factor for relationship problems on its own. Rather, it serves to exacerbate other problems; when other problems are present, such as codependence, violence, or intense resentment, substance use makes the problem worse, and multiplies the stress and problems they cause.

Whether use entails periodic bouts of binge drinking or drug use, or daily use in smaller but still problematic quantities, substance use causes significant problems of its own, however. Substance abuse promotes (for both the user and the partner) significant denial, rationalization, distortion, and avoidance. Other stresses such as missed work and lost income, significant debts, health issues, arrests for driving under the influence of alcohol, and the simple unavailability of partners during and after a binge take their toll on a marriage.

Some report that they find their relationship and family interactions to be much more pleasant when they are drinking. Resentments, hurts, and losses are easier to take and the “improved mood” makes living and being together easier. In some families, it may be that while the parent is drinking, they become more amiable and less likely to confront family problems. This may appear to be a benefit of alcohol use; however, typically this only leads to forestalling problems until they reach a crises level. This creates chronic stress and dysfunction in the family, and makes enjoying closeness and stability a difficult thing. How can you relax when you know some big problem is on the horizon? The entire family continues to avoid the problem, much like the alcoholic.

Jacob and Krahn report that research has shown that for many couples, interactions with and without alcohol differ drastically. During periods of alcohol use, the family shows

I have found in clinical work that when one partner is abusing substances, they destabilize the relationship and prevent any significant work on “real issues.” Therapy feels to the couple like “putting out fires” every session rather than making progress. There is some evidence that alcoholic fathers tend to be more critical and conflicted in their relationships when they have a son. Jacob and Krahn hypothesize that the father may feel more guilt over the example he sets for his son, but the interaction of the son and other parent against the father may in many ways be responsible. Clinical experience often shows that where the father is alcoholic and there is a son in the home, the son tends to take on “father responsibilities” in an effort to compensate for the father’s abdication of his role. This can mean anything from taking care of the home to picking up dad from the bar when he stays out late drinking.

Some couples build good communication skills, while others show poor communication, problem-solving, and intimacy skills from the outset. They may have never learned these skills in their family if the family was emotionally negligent. Thus, they have to learn new skills. They may have learned dysfunctional and maladaptive skills if their family suffered from psychological problems. Thus, they have to unlearn old ways, and then learn new ways to respond. Or, the couple may simply come from vastly different kinds of “normal” families. Learning to communicate their needs in way that the other can understand is a difficult and time-consuming process, one that is naturally fraught with mis-steps, pitfalls, and traps.

When Divorce Is Inevitable

When relationship therapy, couples workshops, and the partners’ best efforts don’t work out, conflict, separation, and eventually divorce often occur. Some separate, thinking they will work things out and get back together, but research shows that when a couple physically separates, divorce is more likely than reunification.

While it is a painful time, divorce can also allow for significant and positive changes in everyone’s lives. Efforts to achieve the impossible can end, old hurts can heal, and adults and children can lead more conflict-free lives. The key to achieving these benefits, however, is the adults involved in the divorce. They will “make or break” the family’s adaptation.

Children and Marital Conflict: the Impact of Family Dispute and Resolution by Cummings and Davies

The Alcoholic Family by Steinglass, Bennett, Wolin, and Reiss

Families in Perpetual Crisis by Kagan and Schlosberg