How Does ADHD Work? (Part II)

How Does ADHD Work? (Part II) 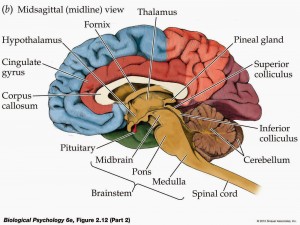 Another explanation for ADHD is a problem with the basal ganglia, and the corpus callosum just above the basal ganglia (Biederman et al, 2004). These are deeper brain structures, which serve as “switching stations” for information. In a typical brain, information passes through these structures, and a decision is made. If the information is important, then it is re-routed to the appropriate areas of the brain for processing; if it is not important, it is ignored and not passed on for additional processing. In an ADHD brain, however, relevant information sometimes is not passed on, and irrelevant information sometimes is not ignored. This means, in effect, that other areas of the brain must sometimes work without the information they need (which would lead to making premature decisions and acting on them quickly, or impulsivity), and must sometimes work with too much information (which would lead to poor decisions sometimes and distractibility other times).

This explanation is a good one, and is supported by research: 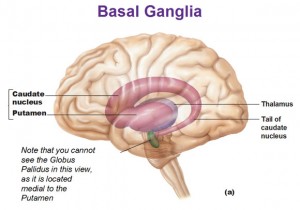 Thus, this model is more specific than the frontal lobe dysfunctional model, and easily explains why a problem in the deeper brain would cause problems in the functioning of the frontal lobes. Further, studies have supported the role of the basal ganglia in ADHD, as well as supported that other areas of brain functioning (sleep regulation, impulse control, attention, working memory…) are linked to areas of the brain that connect directly to the basal ganglia.

Unfortunately, this model is not perfect either:

While not perfect, this seems the best model we have for how ADHD works. Next post… Is There A Genetic Cause For ADHD?